Hear a message from Monika and Karin 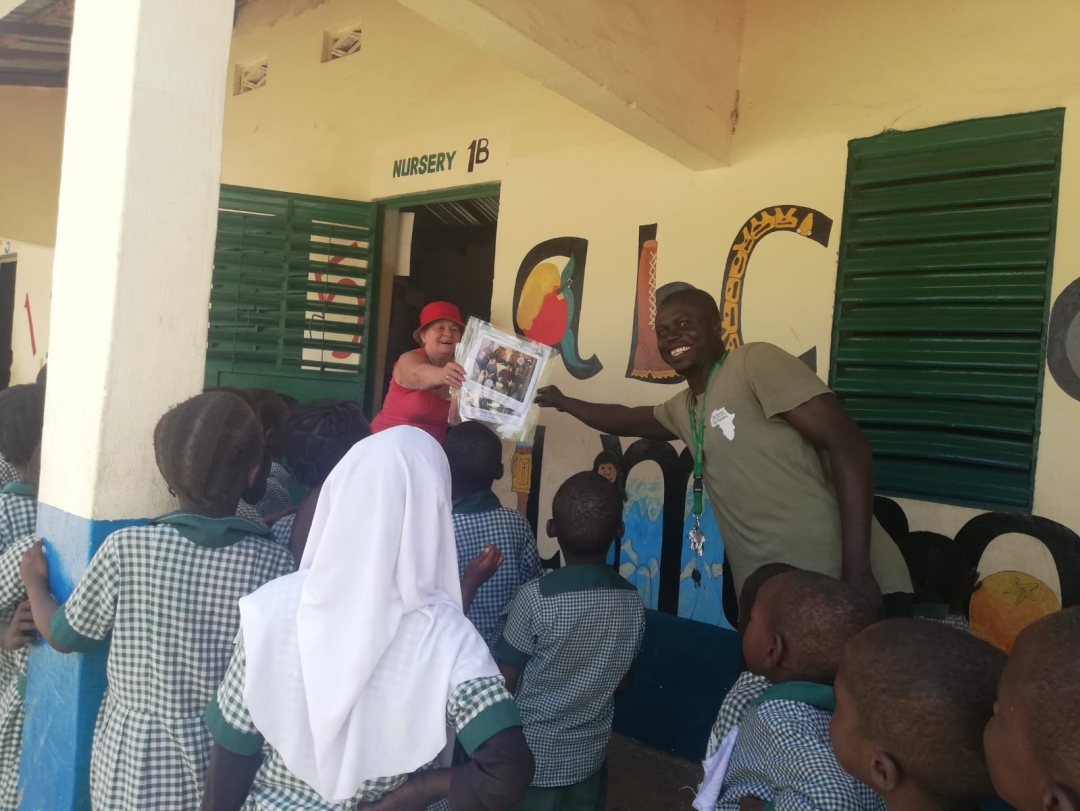 This year 2020, the year of the Corona Pandemic, everything was different for us. Well prepared and full of excited anticipation 14 members and sponsors wanted to start their planed trip to The Gambia on March 16th. Corona was on everybody’s lips but there weren’t any travel restrictions. In The Gambia no Corona case was known at that time. So Malve and Monika started their trip to Banjul at night. Six hours later all flights to The Gambia were cancelled, so all the other friends had to stay at home.

Before they checked out at the airport of Banjul Monika and Malve had to fill in some forms. Men dressed in white coats were coming and took the temperature of all passengers. As usually Lamin was at the airport to take them to the hotel.

One Gambian woman, who came from England, was obviously infected with the Corona virus. The state authorities set up a quarantine centre in a hotel nearby which was guarded by the police. Lamin told us that all schools and the university were closed.

Wednesday morning a part of the donated money was changed into Dalasi. Some sponsors gave money for the families of their godchildren. Malve and Rainer, a Gambia friend from Essen, stayed in Lamin’s store to sort out the clothing, medications, linen etc., which was taken to The Gambia before by a sponsor.

Lamin and Monika were buying food. In some supermarkets rice was out or very expensive. Some kilometres away from the centre they bought rice, oil, onions,ketchup, peanut butter and maggi in the shop of a local shopkeeper. The bulli-car was full to the brim.

When they arrived in Labakoreh Monika was really surprised about the welcome at the school. The children and teachers were there although there were no lessons and were singing to express their delight about our visit. Because the hygiene rules had been just introduced at that time it was a bit strange for the children that there were no hugs, no handshakes etc.

Then Monika and Lamin went to the godfamilies and brought them foodstuffs.

When they went back they stopped at a baker’s shop. There they had the feeling that the authorities reacted to the pandemic well, because there were water and paper offered for the customers to disinfect.

On the 4th day Lamin and Monika did the office work: do the accounts, control the receipts, to discuss the further task and what is to be done next. Lamin prepared everything the way we know it in Germany. That is of big advantage for us. The results of the pandemic became really obvious on Friday. Hotels closed and the first tourists from England and the Netherlands were flown out. The street in the tourist area was empty, so the people there lost the basis for work and earning money. Lamin was crying for these people.

In the early Monday morning Lamin took Monika and Malve to the airport. There it was a real chaos. Four planes were ready to take the great number of tourists home. Many Gambian people who work in Germany waited there, too. But after four hours  waiting the flight home started.

Although it was only a short and very exciting, busy week in The Gambia the most important thing was done in this complicated situation, we gave the people in Labakoreh the feeling that they aren’t alone, that we are ready to help them when they are in need.

Since that time friends and members of our society have been concerned about what happens in The Gambia. We know about the difficulties in The Gambian health system , the lack of protective materials and medicaments in hospitals, the growing poverty among common people there.

During the rainy season in June and July the number of Covid-19 infected people grew. Lamin told us about the disastrous situation in the hospitals in densely populated areas. About 100 dead people and the total population is 2 million. Fortunately in Labakoreh nobody suffers from Corona as far as we know.

Today schools, university and public institutions are open again. There teachers’, pupils’ or visitors’ temperature is taken and they have to disinfect their hands. That is standard in supermarkets, too. We are happy that we can pay the salaries to our teachers and the daily warm meal to our children at school.

And we are motivated to go on to support the people in one of the poorest countries in Afrika. Everything helps, the smallest amount, contributes to our project.

One of our long-term sponsors once said: It doesn’t matter, our help will always go to the right person!

Because of your donations, dear friends and sponsors, you help the children and youth in The Gambia to improve their living conditions.